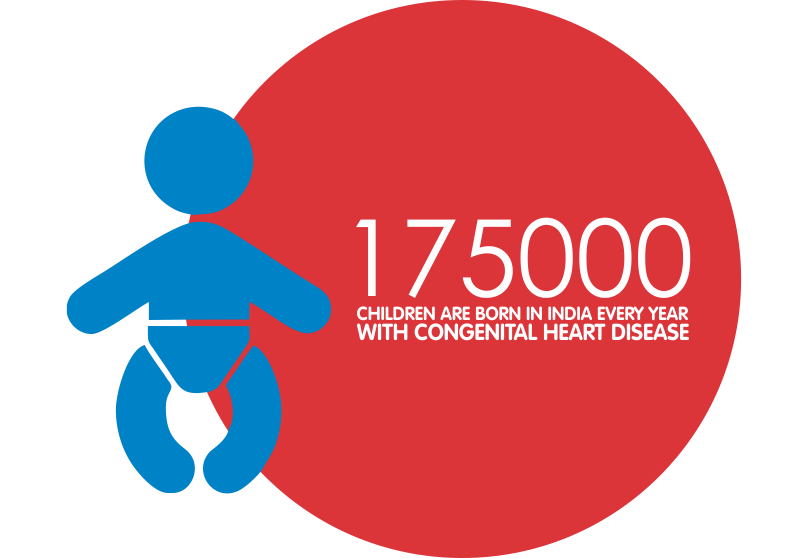 What is congenital heart disease?

A baby's heart starts to develop at conception, but is completely formed by 8 weeks into the pregnancy. Congenital heart defects happen during this important first 8 weeks of the baby's development. Specific steps must take place for the heart to form correctly. Often, congenital heart defects are a result of one of these steps not happening at the right time. For example, a hole is left where a dividing wall should have formed, or a single blood vessel is left, where 2 should have been. 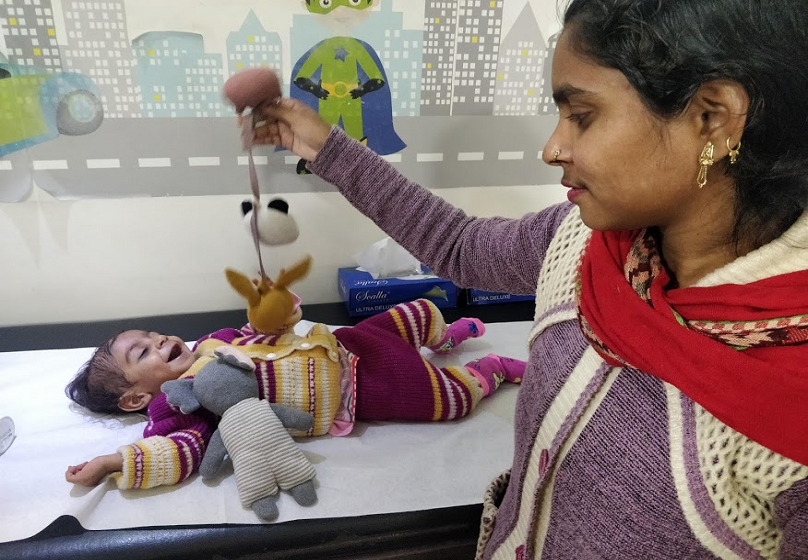 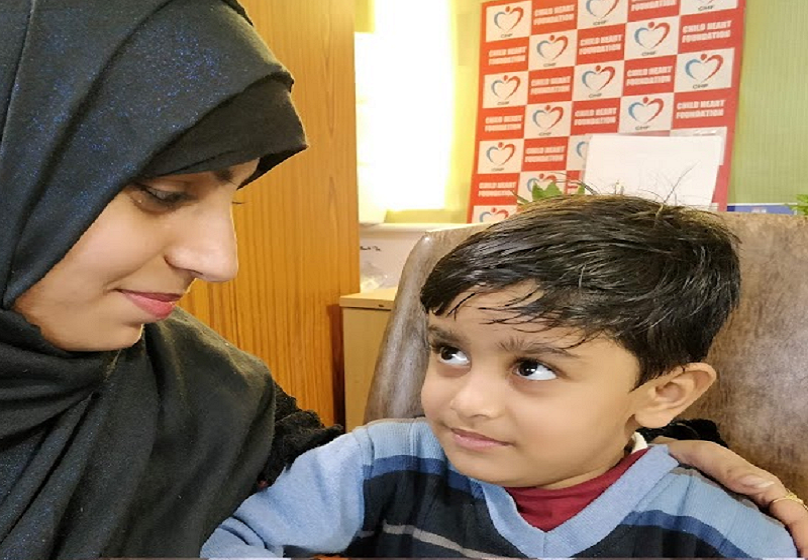 Congenital heart problems range from simple to complex. Some heart problems can be watched by the baby's doctor and managed with medicines. Others will require surgery, sometimes as soon as in the first few hours after birth. A baby may even "grow out" of some of the simpler heart problems, such as patent ductus arteriosus or atrial septal defect. These defects may simply close up on their own with growth. Other babies will have a combination of defects and require several operations throughout their lives.

Call the doctor immediately if your child has any of these symptoms.

Signs and symptoms for CHDs depend on the type and severity of the particular defect. Some defects might have few or no signs or symptoms.

What are the different types of congenital heart defects?


Problems that cause too little blood to pass through the lungs. These defects allow blood that has not been to the lungs to pick up oxygen (and, therefore, is oxygen-poor) to travel to the body. The body does not get enough oxygen with these heart problems, and the baby may be cyanotic, or have a blue coloring.


Problems that cause too little blood to travel to the body. These defects are a result of underdeveloped chambers of the heart or blockages in blood vessels that prevent the proper amount of blood from traveling to the body to meet its needs. Again, in some cases there will be a mix of several heart defects. This creates a more complex problem that can fall into several of these categories.

Patent ductus arteriosus (PDA). This defect occurs when the normal closure of the ductus arteriosus, which is present in all fetuses, does not occur. Extra blood goes from the aorta into the lungs and may lead to "flooding" of the lungs, rapid breathing, and poor weight gain. PDA is often seen in premature infants.


Atrial septal defect (ASD). In this condition, there is a hole between the 2 upper chambers of the heart—the right and left atria. This causes an abnormal blood flow through the heart. Some children may have no symptoms and appear healthy. However, if the ASD is large, permitting a large amount of blood to pass to the right side, symptoms will be noted.


Atrioventricular canal (AVC or AV canal). AVC is a heart problem that involves several abnormalities of structures inside the heart. These include atrial septal defect, ventricular septal defect, and improperly formed mitral and/or tricuspid valves.

Poor blood flow to the lungs

A series of surgical procedures are often needed to increase the blood flow to the lungs and establish separate circulations.

Transposition of the great arteries. With this congenital heart defect, the positions of the pulmonary artery and the aorta are reversed, thus:

Tetralogy of Fallot. This condition is characterized by the following 4 defects:

1. An abnormal opening, or ventricular septal defect, that allows blood to pass from the right ventricle to the left ventricle without going through the lungs

2. A narrowing (stenosis) at, or just beneath, the pulmonary valve that partially blocks the flow of blood from the right side of the heart to the lungs

3. Thickening or enlargement of the right ventricle

4. An "overriding" aorta (the aorta lies directly over the ventricular septal defect) Tetralogy of Fallot can cause bluish color of the skin and mucous membranes due to lack of oxygen (cyanosis).

• Double outlet right ventricle (DORV). A complex form of congenital heart defect, in which both the aorta and the pulmonary artery are connected to the right ventricle.

• Coarctation of the aorta (CoA). In this condition, the aorta is narrowed or constricted. This obstructs blood flow to the lower part of the body and increases blood pressure above the constriction. Usually there are no symptoms at birth, but they can develop as early as the first week of life. If severe symptoms of high blood pressure and congestive heart failure develop, surgery may be considered.

• Aortic stenosis (AS). In AS, the aortic valve between the left ventricle and the aorta did not form properly and is narrowed. This makes it difficult for the heart to pump blood to the body. A normal valve has 3 leaflets or cusps, but a stenotic valve may have only 1 cusp (unicuspid) or 2 cusps (bicuspid). Although aortic stenosis may not cause symptoms, it may worsen over time. Surgery or a catheterization procedure may be needed to correct the blockage, or the valve may need to be replaced with an artificial one. Complex combination of heart defects known as Hypoplastic left heart syndrome can also occur.

• Hypoplastic left heart syndrome (HLHS). A combination of several abnormalities of the heart and the great blood vessels. In HLHS, most of the structures on the left side of the heart (including the left ventricle, mitral valve, aorta, and aortic valve) are small and underdeveloped. The degree of underdevelopment differs from child to child. The left ventricle may not be able to pump enough blood to the body. HLHS is fatal without treatment.

Some CHDs may be diagnosed during pregnancy using a special type of ultrasound called a fetal echocardiogram, which creates ultrasound pictures of the heart of the developing baby. However, some CHDs are not detected until after birth or later in life, during childhood or adulthood. If a pediatrician suspects a CHD may be present, the baby can be referred to a cardiac pediatrician and get several tests (such as an echocardiogram) to confirm the diagnosis.

Treatment for CHDs depends on the type and severity of the defect present. Some affected infants and children might need one or more surgeries to repair the heart or blood vessels. Some can be treated without surgery using a procedure called cardiac catheterization. A long tube, called a catheter, is threaded through the blood vessels into the heart, where a doctor can take measurements and pictures, do tests, or repair the problem. Sometimes the heart defect can’t be fully repaired, but these procedures can improve blood flow and the way the heart works.

Living with a CHD

As medical care and treatment have advanced, infants with CHDs are living longer and healthier lives. Many children with CHDs are now living into adulthood. Many people with a CHD lead independent lives with little or no difficulty

People with a CHD need routine checkups with a cardiologist (heart doctor) to stay as healthy as possible. They also might need further operations after initial childhood surgeries. It is important for people with a CHD to visit their doctor on a regular basis and discuss their health, including their specific heart condition, with their doctor.

HOW CAN YOU HELP?

People come to know about our work through social media and word of mouth. By sharing our work and talking about congenital heart disease in and around your community, you can help us spread the message and help more unprivileged and needy people reach us. You can also help us increase our donor network by sharing our posts, appeal stories and help us raise funds.

You can DONATE NOW or help people connect with us.